The Montenegrin Orthodox Church (MOC; Montenegrin and Serbian: Crnogorska pravoslavna crkva (CPC)/Црногорска православна црква (ЦПЦ)) is a church in Montenegro that is not canonically recognized by the other Orthodox Christian Churches.

The Catalogue of Tzarigrad Patriarchy (April 1855),[2] Athens Sintagma, letter of Tzarigrad Patriarch Grigorius to St. Petar I Petrovic Njegos (dated 29 January 1798),[3] and against the claims of other documents, see here[2] and here[4] (a list of historical documents; external links are in Serbian) are interpreted by the MOC that the Church of Montenegro was independent and autocephalous until Yugoslav regent Alexander I of Yugoslavia abolished it and incorporated, by the decree of 17 (30) June 1920, with Serb-Orthodox churches into a Serbian Orthodox Church,[5][6] an act which received subsequently canonical recognition from the Ecumenical Patriarchate. However, although initially voicing his opposition, the dethroned King Nicholas I Petrovic-Njegos, in late 1920, recognized the unification of the Serbian Orthodox Church for the "benefit" of "all the Serbian people".[needs context]

MOC followers also present foreign early-20th-century travelogues as supposed proofs of the church's legitimacy[weasel words], claiming that in pre-Yugoslav times, the independence of the Montenegrin Orthodox Church has been confirmed as late as 1905,[7] by one of the best-known and well-traveled Balkan experts from the early 20th century, Mary Edith Durham. In her book The Burden of the Balkans, published in London in 1905, Durham explained: "Montenegro alone kept a free and independent Slav Church, which survives to this day".[8]

MOC supporters[who?] present an excerpt from the 1911 edition of Encyclopædia Britannica as one of the proofs of legitimacy:

The Montenegrin Church is an autocephalous branch of the Eastern Orthodox communion. In 1894 it formally vindicated its independence against the claims of the Russian synod.

The remainder of the article refers to Montenegro as a Serb nation-state[needs context], which contradicts with the Church's basic beliefs of a distinct Montenegrin nation[dubious – discuss].

The Montenegrin Orthodox Church was founded in Cetinje on October 31, 1993, by Antonije Abramović, initially with the support of the Liberal Alliance of Montenegro (LSCG), a political party that existed at the time.[9][10] At the time, Montenegro was part of the federal state with Serbia called the Federal Republic of Yugoslavia, which was formed a year earlier following a 1992 referendum. LSCG, a party with a pro-independence agenda, is claimed to having used MOC as a tool in their quest for Montenegrin sovereignty. At that time, the ruling Democratic Party of Socialists of Montenegro (DPS) maintained close ties to Slobodan Milošević's administration in Serbia, and therefore the initial activities of the MOC were very sporadic.

After the death of Metropolitan Antonije, he was replaced by Metropolitan Dedeić. Most liberals did not approve of this change, and their support for the church soon started to fade. By 1997, the DPS administration in Montenegro led by Milo Đukanović began to distance itself from Milošević, and started supporting and financing the Church, which received support from both the Democratic Party of Socialists of Montenegro and the Social Democratic Party of Montenegro; however, after 2001 this support seemingly waned. By this time, LSCG had distanced itself from MOC almost completely.

On January 17, 2001, MOC was officially registered as a non-governmental organization at the local department of the Montenegrin Ministry of the Interior.[11] In the absence of any other relevant and more current piece of legislation, this registration was done by calling on the Law on the Legal Position of Religious Communities from 1977 when Montenegro was a socialist republic within SFR Yugoslavia.

In 2007, MOC attempted to expand its activities beyond the borders of Montenegro. Serbia originally refused to allow MOC to be registered as an organization,[12] as all canonical Eastern Orthodox Churches have also refused to recognize the MOC. However, on appeal, the Serbian Supreme Court ruled this position unconstitutional, overturning the refusal and paving the way for a potential permission to register.[13]

Opponents accuse it of being a group without theological purpose, and of having only political goals.

Metropolitan Mihailo had worked as a professor for the Serbian Orthodox Church and then as a priest of the Greek Orthodox Church in Italy, where he uncanonically created a Serbian Orthodox Municipality out of the Greek Church, leading after a number of scandals, including adultery and accusations of embezzlement, to his permanent suspension from the Church in 1995. After becoming Metropolitan of the MOC in 1997, he was fully excommunicated by the Holy Synod of the Ecumenical Patriarchate of Constantinople from the Eastern Orthodox Church. During his pastoral visit in Argentina in 2007, the Metropolitan Mihailo met Cardinal Bergoglio, current Pope Francis.

On January 11, 2007, MOC restored its own Holy Synod and proclaimed its first decree in which it confirms its autocephalous status. The Holy Synod is constituted by archpriests of MOC, led by Metropolitan Mihailo. The Holy Synod divided Montenegro in five eparchies – Cetinjska, Dukljanska, Primorska, Ostroška and Beranska.

One of the prominent members of the Montenegrin Orthodox Church was Jelisej Lalatović, a former Serb monk from Nikšić, defrocked for stealing of church property and falsification of church seals. In early 2010 he joined with the Croatian Orthodox Union for the formation of the Croatian Orthodox Church and became its chief in Zadar. Lalatović was immediately expelled from the MOC on the grounds of spreading unrest and immorality in the church, the MOC officially dismissing its connections with the formation of the COC.[14][15]

The Montenegrin Orthodox Church currently holds its regular services in several Chapels in the area of Montenegro's royal capital, Cetinje, as well as in its newly built Temple in Kotor. Open-air services are held across Montenegro for Christmas and Easter.[16] The MOC officially opened a new shrine in the old town of Kotor in 2006, following the referendum on independence.

Churches of the MOC in Montenegro: 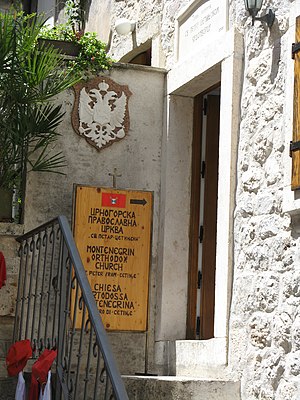 The Church of Saint Peter of Cetinje in Kotor, belonging to the MOC

Construction of the first MOC shrine abroad, the Holy Church of Righteous Ivan Crnojević, is planned to take place in Lovćenac, Vojvodina, Serbia, with the help of the Association of Ethnic Montenegrins in Serbia Krstaš.[17] A contract for the land on which the new MOC shrine will be built was signed on 5 August 2005.[18] A list with the names of several dozen donations—from Montenegro, USA, Slovenia, Australia and Switzerland—for the construction of a MOC shrine in Serbia has also been published.[19]

MOC also has support from abroad, and it has managed to build several shrines in North America, South America, Australia, Western Europe all home to important Montenegrin émigré communities, most of whom also support the Montenegrin Orthodox Church.[20] Services are held in the Australian state of New South Wales as well as in the Argentine province of Chaco, which is the base of Archimandrit Gorazd Glomazic and the Montenegrin Church of Saint Nikola in the colony of Machagay.[21]

Churches of the MOC outside Montenegro:

In April 2007 the "President of the Council for the promotion" of the MOC, Stevo Vučinić, was quoted as saying the "we [the MOC] will retake of all the churches and chapels in the towns, and of course the village churches, and the monasteries...we expect resistance, but in no case will we give up".[22] President of the Republic of Montenegro Filip Vujanović said that he will protect the property of the Serbian Orthodox Church, along with other administrative officials, saying that the MOC should not give up and that they should go to legal suits on specific cases. Despite this, the MOC has claimed that it does not care about anyone's opinion outside its Council calling it irrelevant and is determined to forcibly reclaim their property in Montenegro, currently occupied by SOC.

On Wednesday, April 18, 2007, the representatives of the Montenegrin Orthodox Church – which has announced that it did not wish to cause an "excessive situation", but that it would enter the Serbian Orthodox Cetinje monastery without regard to the reaction of the Serbian Orthodox Church to their claims and requests – attempted to do so. Special police units prevented their forceful entry and that of several hundred supporters of the MOC. There was some pushing and shoving between the police, and the crowd which had intended to force its way into the monastery. Following this, members of the crowd shouted slogans such as "this isn't Serbia", "whose police are you?" and "Risto, Satan" (a reference to Metropolitan Amfilohije of the SOC).[23]

In September 2008, Serbian Orthodox locals attempted to launch a blockade in the Nikšić area to prevent the MOC from building a church there.[24] Sixty five people were arrested for violating public order.[24]

In all official Orthodox theological circles (such as the Russian Orthodox Church or the Ecumenical Patriarchate), MOC is seen as a schismatic group and a political fabrication, similar to the churches that supported it.

Political parties in Montenegro that so far officially stated support of the MOC are: the Liberal Alliance of Montenegro and minority Croatian Civic Initiative, officially proposing it to be mentioned in Montenegro's new Constitution, which eventually did not mention it with its adoption in late 2007. The Initiative invited representatives of both the Montenegrin and Serbian churches to a special municipal meeting in Tivat, sparking a boycott among local Serbian politicians.[28]

In Serbia, the church has the support of the Alliance of Vojvodina Hungarians which believes it should be a recognized religion in the country.[29]

Retrieved from "https://en.everybodywiki.com/index.php?title=Montenegrin_Orthodox_Church&oldid=820453"
Categories:
Hidden categories:
This page was last edited on 19 June 2020, at 20:45.
This page has been accessed 147 times.
Content is available under License CC BY-SA 3.0 unless otherwise noted.
Privacy policy
About EverybodyWiki Bios & Wiki
Disclaimers