"Service" is the fourth episode of the seventh season of the post-apocalyptic horror television series The Walking Dead, which aired on AMC on November 13, 2016. The episode was written by Corey Reed and directed by David Boyd.

The episode focuses on the remaining members of the core group holding together in Alexandria, while mourning the deaths of Glenn and Abraham, but Negan (Jeffrey Dean Morgan) and the Saviors show up early at their gates for their first offering.

At Alexandria, Michonne (Danai Gurira) takes a hidden sniper rifle and leaves for a field, with a burnt out car, to practice with the weapon. A walker eventually approaches and she misses it several times, and eventually decapitates it with her katana. She finds one of her stray bullets hit a deer, and she carries it back to Alexandria.

Meanwhile, Negan (Jeffrey Dean Morgan) and his Saviors, including a captive Daryl (Norman Reedus), arrive earlier than expected to collect half of Alexandria's supplies. Rick (Andrew Lincoln) says they have already set out half of their supplies, but Negan retorts that he gets to determine what they take, as they are providing a "service" to the community. He orders his Saviors to search the homes, taking their beds. Dwight (Austin Amelio) forces Rosita (Christian Serratos) and Spencer (Austin Nichols) to collect Daryl's motorcycle from the nearby woods. While outside of Alexandria, Spencer expresses his concern that Rick is not more accepting of Negan's rule. Rosita recovers a gun and they find Daryl's bike.

As they wait, Negan taunts Rick over video footage taken from when Rick's group first arrived in Alexandria, and asks to see his "sick girl" Maggie. Father Gabriel (Seth Gilliam) appears and asks if Negan would like to pay his respects to her, tricking him into believing Maggie is dead. Their conversation is broken by a gunshot, and they congregate at the community's infirmary. There, Carl (Chandler Riggs) holds a Savior at gunpoint. Negan is impressed by Carl's bravery but forces him to stand down, and then demands to see the armory, as Alexandria seems to have a lot of guns. Olivia (Ann Mahoney) shows Negan around the armory, and he instructs them to turn over all the guns, including those that Rick's group had stolen from one of his outposts. As the Saviors load the guns on their trucks, they find two listed in the inventory missing, and Negan threatens to kill Olivia if they aren't returned. Rick and the other Alexandria survivors search through the homes to find them, and Rick discovers them, along with a stash of food, hidden in Spencer's home.

With all the guns collected, the Saviors prepare to leave when Rick sees Michonne hiding in one of the dilapidated houses outside. He begs Negan for a moment, and goes to the house to convince Michonne to turn over the rifle, which was not in the inventory, and the deer for the better good. Appreciative of Rick's effort, Negan warns Rick that if they catch any Alexandrian with a gun, they will kill them. Rick asks if Daryl can stay, but when Negan puts the question to Daryl, he remains obstinately silent.

After the Saviors leave, Rick accuses Spencer of hoarding supplies, while Spencer taunts Rick for his failure as a leader. Later, Michonne attempts to encourage Rick to fight. Rick tells her he cannot. He explains that he knows that Judith is not his daughter but that of his friend, but loves her anyway, and similarly with Alexandria, they need to accept Negan's rule to keep living. The following day, while outside Alexandria in the same field, Michonne finds all the mattresses that the Saviors took burned in a pile by the road.

At night, Rosita finds and picks up an empty shell casing. She visits Eugene (Josh McDermitt) and requests he make her a bullet for the gun she still has. 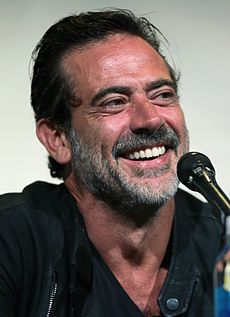 Jeffrey Dean Morgan received mixed reviews for his performance as Negan in this episode.

"Service" received mixed reviews from critics. On Rotten Tomatoes, it holds a 62% with an average rating of 6.94 out of 10, based on 34 reviews. The site's consensus reads: Though the pace is slower than desired, "Service" systematically sets a foundation for a frightening future while furthering the story of life under Negan's rule.[1]

Kelly Lawler of USA Today reviewed the episode, saying, "Jeffrey Dean Morgan's villain is still just as boring, just as non-threatening as he was before. An extra-long episode that was basically just the IKEA trip from Hell doesn't really do anything to further his character."[2] Erik Kain of Forbes also reviewed the episode, saying, "All told, this was the weakest episode of the season so far by a long shot. I hope the showrunners tighten things up going forward, and give us more action, more intertwined storylines, and less Negan and his endless chatter."[3]

The episode received a 5.4 rating in the key 18-49 demographic with 11.40 million total viewers.[4] It is at the time the lowest rating the show has had since "Dead Weight" from season four.[5]

Share
Retrieved from "https://en.everybodywiki.com/index.php?title=Service_(The_Walking_Dead)&oldid=1151082"
Categories:
Hidden categories:
This page was last edited on 1 December 2020, at 15:18.
Content is available under License CC BY-SA 3.0 unless otherwise noted.
This page has been accessed 737 times.
Privacy policy
About EverybodyWiki Bios & Wiki
Disclaimers