Search The Same Boat on Amazon.

"The Same Boat" is the thirteenth episode of the sixth season of the post-apocalyptic horror television series The Walking Dead, which aired on AMC on March 13, 2016. The episode was written by Angela Kang and directed by Billy Gierhart.

This episode focuses on the characters of Carol (Melissa McBride) and Maggie (Lauren Cohan), who are captured by members of Negan's group known as the Saviors. It marks a turning point in an ongoing plot arc for Carol, one of the most ruthless members of Rick's (Andrew Lincoln) group, who is forced to re-examine herself as she is confronted by a remorseless killer named Paula (Alicia Witt).

Carol Peletier (Melissa McBride) and Maggie Greene (Lauren Cohan) are survivors in a post-apocalyptic world overrun by zombies, colloquially referred to as "walkers," "growlers" or "cold blooded." Other members of their group, including Carol's close friend Daryl Dixon (Norman Reedus) and Maggie's devoted husband Glenn Rhee (Steven Yeun), were recently led by Rick Grimes (Andrew Lincoln) to make a pre-emptive sneak-attack against another community of survivors known as the Saviors.[1] Daryl had previously been threatened by a group of Saviors he was able to kill[2] and Maggie negotiated a mercenary deal with the leader of the Hilltop, Gregory, to eliminate the Saviors and their leader, Negan.[3] Using ruthless tactics such as killing people in their sleep and gunning-down those attempting to escape, the group slaughtered two dozen Saviors. Although one of Rick's most stalwart allies, Carol refused her assignment on the main attack and insisted on staying with a pregnant Maggie on the sidelines.[1]

Before the apocalypse, Carol was a meek and battered housewife by abusive husband Ed. She continued to place her fate in the hands of others and in religious faith; however, her daughter Sophia went missing. Carol then prayed for her daughter to be safely returned, but it is later revealed that Sophia turned into a walker and kept in the Greene Family Farm.[4] She then gradually became more self-confident and capable as a survivor to the point where she began making life-or-death decisions for the group.[5] Carol displayed a cunningness when dealing with others who might threaten her group, disguising herself as a walker,[6] a suburban housewife,[7] a member of an invading force,[8] and has been coldly pragmatic in allowing allies to die to protect the interests of her core group.[5][9][8] She was particularly merciless in dealing with a murderous group of feral survivors called the Wolves,[8] but became shaken when she contributed to the death of the Wolves' leader only to realize that they shared the same goal: to protect her community's doctor.[2] Carol has refused to discuss the incident while dwelling on the many lives she has taken.[1]

At night, out in the woods, Carol (Melissa McBride) stops Maggie (Lauren Cohan) from joining the gun battle against the Saviors and, as they confront each other, are approached by a Savior named Donnie (Rus Blackwell). Carol shoots Donnie before she and Maggie are surrounded, surrendering to three other Saviors: Paula (Alicia Witt), Michelle (Jeananne Goossen), and Molly (Jill Jane Clements). As day breaks, Paula's group observe Daryl (Norman Reedus) capturing a Savior named Primo (Jimmy Gonzales), and, to stop the savage beating inflicted on him, Paula tells Rick (Andrew Lincoln), over a walkie-talkie, that they have captured Maggie and Carol. Rick tries to negotiate for a prisoner exchange, but, while Donnie needs the medical attention Primo could provide, Paula feels they are at a disadvantage against Rick's group and decides to withdraw.

While awaiting reinforcements and deciding their next move, Paula and her group bring Carol and Maggie to a former slaughterhouse, where the Saviors have cached supplies guarded by trapped walkers. Carol puts on an act of being frightened and weak-willed, while revealing that Maggie is pregnant in an effort to protect her. Donnie suffers excruciating nerve damage from a tourniquet and tries to physically take out his frustrations on Carol, but is pistol-whipped by Paula, who tells Donnie that she doesn't blame him and casually accepts the violence. Paula then tells Carol that she is willing to kill as many people as necessary to stay alive; Carol is horrified to see herself in Paula.

Over the walkie-talkie, Paula directs Rick to a location for a prisoner exchange, but believes he is being duplicitous and tracking them. Paula, Michelle, and Molly prepare to flee the moment their reinforcements arrive or to ambush Rick's group should he get to the slaughterhouse first. Left unguarded, Carol is able to free herself and Maggie, who insists on killing their captors. They use a zombified Donnie to ambush Molly, taking her handgun and beating her to death. Paula eventually catches them as they negotiate a gauntlet of walkers, but Carol gets the upper hand and wounds Paula as the walkers get loose. Maggie fights Michelle, who slices at her stomach with a knife; Carol then shoots Michelle dead. Paula then fights Carol, who impales her on a spike and leaves her to be devoured by a walker. Carol then takes Paula's radio and imitates Paula's voice to tell the Savior reinforcements to meet them on the kill floor. There Carol traps five Saviors, stunt performers (Marian E. Green), (Danny Epper), (Clayton Thompson), (Mike Kirton), (Danny Maze), burning them alive with gasoline and a lit cigarette.

Killing the walkers on their way out, Maggie and Carol get to the entrance just as their own group arrive. Glenn (Steven Yeun) and Daryl embrace them. Carol admits to Daryl that she is not okay, while Maggie tells Glenn that she "can't anymore." With all of his friends dead, Primo tells Rick that he is Negan, but Rick, without hesitation, shoots the bound prisoner in the head as a stunned Carol looks on.

The slaughterhouse set was custom-built for filming.[10] 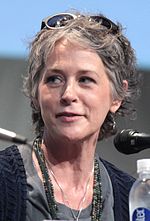 The episode received critical acclaim, with the performances of Melissa McBride and Alicia Witt being singled out for praise. On Rotten Tomatoes, it holds a 97% with an average rating of 8.16 out of 10, based on 30 reviews. The critics' consensus reads: "The Same Boat" takes a strong female focus by continuing Carol's arc while deepening viewer anticipation for Negan's ominous arrival.[11]

Matt Fowler from IGN gave it 9.3 out of 10 and praised McBride and Witt's performances and the episode's tension.[12] Jeremy Egner of The New York Times commented positively on the complexity of Carol's division between ruse and real emotion, saying "Like always, Carol did whatever necessary to survive and protect her cohorts, and did so in particularly brutal fashion [...] but she seems increasingly unable to avoid reckoning with the toll. “Are you O.K.?” Daryl asked when he arrived. “No,” she responded, and that was before Rick executed the remaining Savior right in front of her. It's going to take more than a few Hail Marys to make that image, among many others, go away."[13]

Lenika Cruz and David Sims of The Atlantic called it the "most overtly feminist episode thus far" and the episode "was an elegantly written and executed bottle episode, designed largely to subvert the trope of the helpless woman".[16] Laura Prudom of Variety praised the episode and wrote that it is "an incisive chamber piece that serves as a compelling analogue to last week’s “Not Tomorrow Yet” in its surprisingly deep examination of moral relativism, ably penned by Angela Kang and directed with claustrophobic intensity by Billy Gierhart."[17]

Share
Retrieved from "https://en.everybodywiki.com/index.php?title=The_Same_Boat&oldid=1151062"
Categories:
Hidden categories:
This page was last edited on 1 December 2020, at 15:05.
Content is available under License CC BY-SA 3.0 unless otherwise noted.
This page has been accessed 727 times.
Privacy policy
About EverybodyWiki Bios & Wiki
Disclaimers