"Stalker" is the tenth episode of the tenth season of the post-apocalyptic horror television series The Walking Dead, which aired on AMC on March 1, 2020. The episode was written by Jim Barnes and directed by Bronwen Hughes.

After escaping the cave, Daryl (Norman Reedus) confronts Alpha (Samantha Morton). Meanwhile, the residents of the Alexandria Safe-Zone must defend the community from a threatening, outside force. The episode was acclaimed by critics.

In Alexandria, Rosita wakes up from a nightmare, involving a Whisperer killing her child, Coco. At the gates, Gamma arrives to explain that their people are trapped in a cave surrounded by Alpha's horde. She also explains that the baby her people left behind is her nephew and she would do anything to see him again. Gabriel seems to believe Gamma's story, but Rosita calls her a liar and knocks Gamma unconscious, and orders for her to be put in the basement cell. She later wakes up in the cell where she is confronted by Gabriel and Rosita about Dante's actions, but she claims she wasn't involved in that. When Gabriel insists she is hiding something and calls for a sincere confession, Gamma tearfully reveals she killed her sister for Alpha. Believing her, Gabriel accepts her help. In the meeting hall, Gamma shows them the location of the cave on a map and explains that most of Alpha's forces are situated around the cave, so the borders are defenseless.

In the woods, Daryl secretly observes Alpha and three of her followers leading a faction of the horde from another entrance to the cave. Following them to a river, Daryl attacks them; a brutal fight ensues between Alpha and Daryl. She slices Daryl's face under his eyes, clouding his vision with blood, and stabs him in the leg with a knife. Both severely injured, the two flee the scene separately. Alpha soon stumbles into an abandoned gas station where Daryl is hiding; she starts making noise to attract nearby walkers. Daryl is able to defend himself against the oncoming walkers, but is forced to pull the knife out of his leg to kill the last walker; however, in doing so, begins to lose massive amounts of blood. Meanwhile, Alexandria is informed by their surveillance post, three kilometers from the community, about a hundred-walker herd incoming. Unable to receive a response, Gabriel assigns Rosita and Laura to secure the gates with a support group while he and others head out on a recon mission.

That night, Beta infiltrates Alexandria via tunnels entering through a grave. He slaughters several survivors in their homes, turning them into walkers so the others will soon deal with the undead as a distraction. On the road, Gabriel and his scout team find the soldiers from Echo Post murdered, and realize the Whisperers forced them to give false information about the herd so they would leave Alexandria and weaken the inner defense. Beta soon finds Gamma in her cell where she explains to Beta that the community is not as Alpha had told them; unfazed, Beta demands Gamma to go with him. Laura then appears and threatens Beta with an ax; Gamma flees for help. After killing Laura, Beta enters the Grimes' residence to investigate, but winds up being shot by Judith from behind a door. He falls unconscious while Judith and R.J. sneak past him, but he soon wakes up and grabs Gamma by the leg, tripping and knocking her out. Rosita appears and clashes with Beta; she manages to hurt him, but he gains control of the fight and slams her on the ground. As Beta prepares to kill Rosita, Gamma arrives and picks up one of his knives. Gamma tells Beta to stop or she'll kill herself, saying she knows Alpha wants her alive; he surrenders and they depart together. Along the way, they are caught by Gabriel's group; Beta quickly flees. Gamma, lying on the ground, surrenders and tells Gabriel that she was not responsible for what happened in Alexandria; the scout team and Gamma return to Alexandria.

At the gas station, Alpha and Daryl continue succumbing to their wounds. Lydia soon appears and approaches Alpha, who reveals she has been training Lydia to be her replacement when she is gone and asks Lydia to kill her. She refuses to kill her mother and instead leaves her to pass out from blood loss. The following morning, Alpha wakes up alone while Gabriel is informed that Beta infiltrated Alexandria through a grave. Gabriel is then approached by Aaron, who explains that not everyone escaped the cave and had become separated. Rosita, Gamma (now going by her real name—Mary), and Judith load up with a group to travel to the Hilltop so that the wounded can be tended to. Elsewhere in the forest, Daryl wakes up to find that Lydia has nursed him back to health. After Lydia tells Daryl that he has been out for just a few hours, he asks if she killed her mother. In response, Lydia asks Daryl if he himself could kill his own father, aware of their similar history. Alpha, reunited with her own, vows to exact revenge on the communities with their horde while reiterating the Whisperers' anthem, officially declaring war.

The episode features the final appearance of Lindsley Register as Laura, who had been on the show since the seventh season, first appearing in the episode "The Cell".[1] 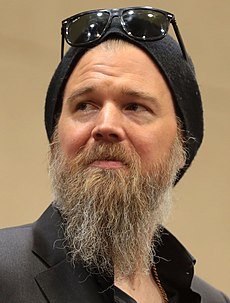 "Stalker" received critical acclaim. On Rotten Tomatoes, the episode has an approval rating of 100% with an average score of 7.95 out of 10, based on 19 reviews. The site's critical consensus reads: "Fueled by a thrillingly brutal confrontation between Daryl and Alpha, 'Stalker' showcases a nerve-wracking flashpoint that brings the tensions of the incoming Whisperer War to a simmering boil."[2]

Ron Hogan of Den of Geek gave the episode a rating of 4 out of 5 and praised the episode, writing: "The knife fight between Alpha and Daryl is well-shot, chaotic enough with walkers and other Whisperers to effectively disguise Alpha's presence without muddying up the solid choreography." He also positively commented on Ryan Hurst as Beta, stating that he "does a brilliant job of simply lurking in the background of scenes like a true Michael Myers type".[3]

Alex McLevy writing for The A.V. Club gave the episode a "B" grade and complimented the direction by Bronwen Hughes as the MVP of the episode, writing: "She knows how to cross-cut between locations and points of view, ratcheting up momentum and intensity without sacrificing coherence or spatial geography."[4] Jeff Stone of IndieWire gave the episode an "A-" rating and wrote that the episode "might not let us know what's going on with Connie, Magna, or Carol, but it more than makes up for that by delivering two taut, exciting plots and ratcheting up the tension of the Whisperer War".[5]

Writing for Vulture, Richard Rys praised fight scene between Daryl and Alpha, stating that "the brawl that ensues does not disappoint".[6] Alex Avard of GamesRadar+ gave the episode 2.5/5 stars and opined the episode as "another series of fairly inconsequential events [that] are stretched out over the course of 45 minutes". He concluded by writing that the episode "treated us to some strong character moments from Daryl, Beta, and Gabriel, but boil it down to its rudiments, and little has really changed in the dynamics of the Whisperer war at large".[7]

"Stalker" received a total viewership of 3.16 million and was the second highest-rated cable program of the night.[8]

Share
Retrieved from "https://en.everybodywiki.com/index.php?title=Stalker_(The_Walking_Dead)&oldid=1151129"
Categories:
Hidden categories:
This page was last edited on 1 December 2020, at 15:52.
Content is available under License CC BY-SA 3.0 unless otherwise noted.
This page has been accessed 841 times.
Privacy policy
About EverybodyWiki Bios & Wiki
Disclaimers