What It Always Is

Search What It Always Is on Amazon.

"What It Always Is" is the fifth episode of the tenth season of the post-apocalyptic horror television series The Walking Dead, which aired on AMC on November 3, 2019.

Hilltop is still dealing with the break in the fence and the periodic attack by walkers. Kelly, who is suffering from hearing loss, gets separated from her hunting party, which concerns her deaf sister Connie. Daryl offers to help Connie search for her along with Magna, who has been lax at her duties at Hilltop. They eventually find Kelly near a stash of supplies that she and Magna have been taking from Hilltop, as they do not yet fully trust the community. Daryl agrees to cover for them, claiming they happened on the supplies, but Yumiko argues with Magna about this as it is disrespectful to the Hilltop. Magna reveals to Yumiko she killed the man that attacked her cousin, and creating a rift between them. Aaron, while on patrol, spots Gamma leading a walker to their river water so that its blood poisons the waters. Gamma senses someone nearby but does not spot Aaron. Gamma reports back to Alpha, who tells her to be wary. Later, as Gamma leads another walker to blood-let, she cuts her hand, and Aaron, who saw her, passes her a bandage. She takes it and runs off. When Gamma shows this to Alpha, she considers that Aaron may be interested in Gamma, and takes off Gamma's walker mask, suggesting she may need to use another to keep him interested.

Negan gets some distance from Alexandria and finds he is being followed by Brandon, the son of a former Savior also living in Alexandria. Brandon expresses his admiration for the way Negan used to be when he ran the Saviors, and remakes Negan's bat, Lucille, and returns his old leather jacket, which Negan is reluctant to take though. The two help rescue a mother and son trapped aboard a bus. Negan becomes irritated with Brandon's constant pestering and tells him to go away, causing Brandon to angrily leave. Negan is drawn to the young boy, as he reminds him of Carl, and promises that he will lead them in the right direction to Hilltop where he and his mother can live safe. When Negan returns from collecting firewood, he finds that Brandon has killed the two, thinking this was a test to become Negan's protege. Enraged by the senseless murder, Negan takes a stone and beats Brandon to death, then recovers Lucille and his jacket and continues on. Negan purposely crosses into Whisperer territory and is caught by Beta.

Siddiq discovers that Ezekiel has thyroid cancer, and does not know how long he'll live. Though Ezekiel's grandmother and father fought off the same illness, Ezekiel is convinced that his condition is terminal in the current world which lacks modern medicine. Siddiq contacts Alexandria as he plans to return that night, but arranges for Carol to come talk to Ezekiel. However, just as Carol is about to come on, Ezekiel turns off the radio. 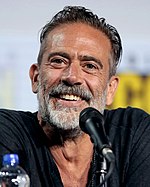 The character development of Negan (Jeffrey Dean Morgan) was praised in this episode.

"What It Always Is" received positive reviews from critics, with praise going towards Jeffrey Dean Morgan’s performance. On Rotten Tomatoes, the episode has an approval rating of 93% with an average score of 6.82 out of 10, based on 14 reviews. The site's critical consensus reads, "While packed with several gripping plot threads, a rewarding showcase of Negan is what truly makes 'What It Always Is' a stand out episode of the season."[1]

"What It Always Is" received a total viewership of 3.09 million. It was the highest-rated cable program of the night; however, it decreased in viewership from the previous week and was a series low in viewers.[2]

Share
Retrieved from "https://en.everybodywiki.com/index.php?title=What_It_Always_Is&oldid=1151243"
Categories:
Hidden categories:
This page was last edited on 1 December 2020, at 17:44.
Content is available under License CC BY-SA 3.0 unless otherwise noted.
This page has been accessed 714 times.
Privacy policy
About EverybodyWiki Bios & Wiki
Disclaimers