"Morning Star" is the eleventh episode of the tenth season of the post-apocalyptic horror television series The Walking Dead, which aired on AMC on March 8, 2020. The episode was written by Vivian Tse and Julia Ruchman, and directed by Michael E. Satrazemis.

After Daryl (Norman Reedus) and Lydia's (Cassady McClincy) encounter with Alpha (Samantha Morton), the communities must decide whether to run or fight the Whisperers, who are coming for Hilltop. Meanwhile, Eugene's (Josh McDermitt) communication with Stephanie (Margot Bingham) gets complicated. The episode received positive reviews from critics.

Eugene continues his conversations with Stephanie over the radio. He discovers that she also saw the falling satellite and determines she must be relatively nearby. Eugene tells her he is in Virginia, but she is still hesitant to reveal anything due to her community's strict rules about contact. Eugene offers to allow her to select a time and place for them to meet, and she says she will discuss it with the others. At the Hilltop, Aaron arrives with Mary, explaining that she wishes to see her nephew, Adam, now under the care of Earl. Earl does not allow her to see Adam, remembering how her people abandoned him.

Ezekiel, having been told by Jerry and Kelly about the events at the mine, tracks down Carol at Daryl's former camp in the woods, and convinces her to return to the Hilltop. Daryl and Lydia also return shortly after, warning that Alpha and her horde are coming. Before leaving with the horde, Negan attempts to persuade Alpha that it would be better to terrorize the Hilltop and make them bend the knee to her rather than slaughtering them, and she seems to consider this. The residents of the Hilltop attempt to evacuate, but discover Alpha has blocked all roads leading out, with reanimated Hilltop guards hung along the road. Daryl recognizes this as a Negan scare tactic, concluding that he is now working with Alpha. With no other option, they begin reinforcing the perimeter of the Hilltop.

Rosita comes in search of Eugene and discovers the unattended radio with Stephanie trying to reach Eugene. Rosita asks her who she is, and Stephanie immediately falls quiet. Eugene hurriedly rushes back in and attempts to smooth over the situation but is unable to elicit a response from Stephanie, and he sternly asks Rosita to leave as he continues to attempt to reestablish communication. Carol visits Ezekiel and takes notice of his growing tumor, and the two sleep together. Mary attempts to see Alex, but is stopped by Alden, chastising her for her perceived role in the beheading of Enid and others from the fair. Rosita later finds Eugene rigging up defenses and encourages him to not give up on Stephanie, challenging him to kiss her, knowing his long infatuation with her. He finds he is unable to, proving Rosita's point that he really is interested in Stephanie, and he resolves to keep trying to contact her. He does so, singing an excerpt of "When the Wild Wind Blows" that he'd refused to sing previously. When he finishes singing, she returns to the radio and completes the song. She apologizes for breaking contact, and gives him coordinates to meet her in one week. Daryl and Ezekiel meet before the battle, reconciling their past disputes and promising each other that should one of them fall, the other would be in charge of leading the children out of harm's way.

The residents of the Hilltop gather with weapons and shields outside the walls of the community, and prepare to face the horde. The walker horde is slowed down by electrical traps and a makeshift barricade which allowed the survivors to kill walkers from a safe distance. In the woods, Alpha and Negan prepare for the second half of their plan. Alpha tells Negan that she does intend for the survivors to join with her, as part of her horde. The Whisperers load up grenades of flammable liquid, and sling them at the barricade, the walls of the Hilltop, and the survivors themselves. They then follow up with flaming arrows, setting alight the barricade. The flames and the force of the horde are too great, and the survivors are forced to fall back. While attempting to reenter the Hilltop, the outer walls are set ablaze, trapping the survivors between the fire and the horde.

Margot Bingham portrays Stephanie, who reveals her identity in the episode.

This episode reveals the identity of the mysterious woman on the radio whose name is Stephanie, portrayed by Margot Bingham, a member of the Commonwealth.[1][2] The song Eugene sings on the radio to Stephanie is "When The Wild Wind Blows" by Iron Maiden; the song received positive reviews from critics.[3] 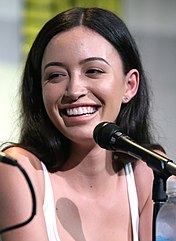 Christian Serratos (Rosita Espinosa) and Josh McDermitt (Eugene Porter) received positive reviews for their scenes together in the episode.

"Morning Star" received positive reviews. On Rotten Tomatoes, the episode has an approval rating of 94% with an average score of 7.56 out of 10, based on 18 reviews. The site's critical consensus reads: "Before ending with a spectacular cliff-hanger, 'Morning Star' pits the Hilltop crew against the Whisperers in a skillfully staged battle that promises a bloody end to this season."[4]

Dustin Rowles of Uproxx wrote: "It is a tremendously great battle and a great cap to the end of the episode, which otherwise trafficked in some nice character moments, particularly those of Rosita and Eugene." He praised Christian Serratos, writing that she "has been very good this season now that she's finally been given some material with which to work".[5]

Writing for Pajiba, Brian Richards gave it an average review, and wrote in summary: "Not a bad episode, even though it took it sweet-ass time to get the ball rolling and have the war against the Whisperers finally start."[6]

Matt Fowler of IGN gave the episode an 8 out of 10 and wrote: "'Morning Star' told one story, and told it well. It gathered the entire cast into one spot and forced them into battle against staggering odds. It felt big and important enough to be the final 'brawl to settle it all' when it comes to the Whisperer War."[7]

Share
Retrieved from "https://en.everybodywiki.com/index.php?title=Morning_Star_(The_Walking_Dead)&oldid=1150261"
Categories:
Hidden categories:
This page was last edited on 1 December 2020, at 05:12.
Content is available under License CC BY-SA 3.0 unless otherwise noted.
This page has been accessed 843 times.
Privacy policy
About EverybodyWiki Bios & Wiki
Disclaimers