Search Walk with Us on Amazon.

"Walk with Us" is the twelfth episode of the tenth season of the post-apocalyptic horror television series The Walking Dead, which aired on AMC on March 15, 2020. The episode was written by Nicole Mirante-Matthews and Eli Jorne, and directed by Greg Nicotero.

Following the attack on Hilltop, led by Alpha (Samantha Morton) alongside Negan (Jeffrey Dean Morgan), the Whisperers lead a massive horde of walkers into the settlement while the survivors are forced to fall back.

The residents of the Hilltop continue to battle the horde of walkers, aided by their catapults inside the walls. In the midst of events, Yumiko spots Magna, who is disguised and moving amongst the herd, still alive. Despite successfully slowing down the herd, the survivors are overwhelmed and are forced to retreat after the defensive wall falls. In the aftermath of the battle, Alpha chastises Negan for finishing off a dying Hilltop soldier rather than letting him become part of her horde. He believes that they have been victorious, but Alpha does not share his sentiment, since she does not have everything she wants—Lydia. Negan is then ordered by Beta to gather the scattered walkers. In doing so, Negan spots Lydia limping off in the distance and follows her. He encounters Aaron, who is dragging an unconscious Luke. Aware of Negan's betrayal, Aaron angrily threatens Negan, but is forced to fall back to kill incoming walkers while Negan escapes. Negan soon catches up to Lydia and captures her.

Elsewhere, Alden, Kelly, and Mary make their way down the road with baby Adam. Alden still refuses to allow Mary to hold Adam, though she knows exactly how to calm him down. He finally relents and Mary holds her nephew, quickly quieting him. The three stop to rest briefly and talk about the baby's mother, but Mary hears incoming walkers; the trio flees. Taking refuge inside an abandoned van, Mary stays outside to lead the walkers away. She does so and kills them before being stabbed in the stomach by Beta, who reaffirms that she will walk with them. Mary tries to fight back and, in her struggle, rips a part of Beta's mask off; Beta finishes her off. A lone Whisperer sees this and recognizes Beta from before the apocalypse; Beta slits the Whisperer's throat to protect his real identity. He then waits for Mary to reanimate, but Alden shoots her with an arrow once she does; Beta runs off.

Meanwhile, Carol, Eugene, Yumiko, and Magna are resting in the woods. Eugene looks over the little equipment he was able to salvage, and tells Carol about his meeting with Stephanie and how he does not think now is the time for it, but she encourages him to keep the meeting. Magna tells Yumiko how she and Connie blended in with the horde, but became separated. Yumiko becomes angry with Carol and blames her for what they went through, and punches her. Concurrently, Daryl, Rosita, Jerry, Dianne, and Nabila make their way to the rendezvous point where they would meet with Ezekiel and the children, but find it empty; Daryl and Jerry travel back to the Hilltop. They discover Ezekiel still alive under some debris and are told that the children are under the care of Earl, who is keeping the children safe in a cabin. However, Earl is slowly dying from a bite wound and asks Judith to keep the children safe from him; he commits suicide by headbutting a spike he drove into a table but fails.

Afterwards, Ezekiel leads the others to the cabin where they find the children. Daryl comforts Judith, who was forced to put down a reanimated Earl. Out in the woods, Negan informs Alpha that he found what she was looking for and leads her to a secluded cabin. Along the way, Negan admonishes Alpha for wanting to take her daughter's life, telling her about his own tragic history with his wife, who died from pancreatic cancer. Alpha retorts that it is Lydia's destiny to be killed by her hand; the two arrive at the cabin. Alpha opens the door, but finds it empty. Confused, Alpha turns to Negan, who suddenly slashes her throat, and then kisses and holds her as she is dying. Negan subsequently meets up with Carol and dumps Alpha's reanimated head at her feet. Carol tells Negan, "took you long enough." 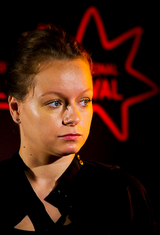 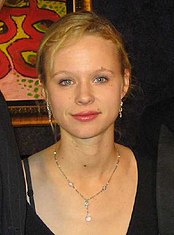 "Walk with Us" marks the deaths of Alpha, portrayed by Samantha Morton (left), and Gamma / Mary, portrayed by Thora Birch (right). Morton's performance has been critically acclaimed.

"Walk with Us" features the death of Alpha (Samantha Morton) at the hands of Negan (Jeffrey Dean Morgan) which resembles her death from an issue adapted from the comic book series.[1] It also features the final appearances of Gamma / Mary (Thora Birch) and Earl Sutton (John Finn), who are both killed in this episode.[2]

During an interview with Dalton Ross for Entertainment Weekly, Morton said this about her character's death:

In an interview with Kirsten Acuna writing for Business Insider, Morton also revealed this about Alpha's death:

Angela Kang, showrunner of The Walking Dead, in an interview for The Hollywood Reporter clarified about the fate of Alpha and said:

In an interview for Entertainment Weekly, Kang explained Alpha's death and said:

The character development of Negan (Jeffrey Dean Morgan) was acclaimed by critics in this episode.

"Walk with Us" received critical acclaim. On Rotten Tomatoes, the episode has an approval rating of 94% with an average score of 8.11 out of 10, based on 18 reviews. The site's critical consensus reads: "Following a swift and violent conclusion to last week's harrowing battle, 'Walk With Us' delivers a restless aftermath marked by stunning characters deaths and unanticipated twists."[7]

Noetta Harjo of Geek Girl Authority praised the episode and wrote: "This season is just getting better. I was on the edge of my seat throughout this episode of The Walking Dead. RIP Mary aka Gamma and Earl. RIP Alpha?"[8]

Alex McLevy writing for The A.V. Club gave the episode a C+ and wrote: "It started great and ended even better; if only there weren't that whole episode in between to drag it down."[9]

Conversely, Jeff Stone writing for IndieWire gave the episode an A- and wrote: "There are a few too many holes for the episode to be a complete success, but it's another very strong showing in a half-season that's had way more good than bad."[10] Erik Kain in his Forbes review noted the following: "The second part of the Hilltop battle was almost as great as the first part. It's pretty cool to see The Walking Dead go this big with a battle scene and really pull it off."[11]

Writing for Den of Geek, Ron Hogan gave the episode a 4 to 5 rating and wrote: "Solid performances abound, with [Jeffrey Dean] Morgan and Samantha Morton continuing to be spectacular."[12]

Matt Fowler of IGN gave the episode an 8 out of 10 and wrote: "It was paced and plotted out in a bizarre way that left us asking questions... Some mid-card character deaths, and a big final twist that took down the major villain, helped elevate it in the end."[13]

Brian Richards writing for Pajiba praised the episode and wrote: "A very impressive episode that helped bring an end to Samantha Morton's time as Alpha, who was one of the very best things about the show these last couple of seasons."[14]

"Walk with Us" received 3.49 million viewers, up from the previous episode's rating.[15]

Share
Retrieved from "https://en.everybodywiki.com/index.php?title=Walk_with_Us&oldid=1151229"
Categories:
Hidden categories:
This page was last edited on 1 December 2020, at 17:28.
Content is available under License CC BY-SA 3.0 unless otherwise noted.
This page has been accessed 837 times.
Privacy policy
About EverybodyWiki Bios & Wiki
Disclaimers