Open Your Eyes (The Walking Dead)

Search Open Your Eyes (The Walking Dead) on Amazon.

"Open Your Eyes" is the seventh episode of the tenth season of the post-apocalyptic horror television series The Walking Dead, which aired on AMC on November 17, 2019.

Siddiq struggles with ongoing visions of being held captive and Alpha killing people and a voice telling him to open his eyes, but does not know if these are dreams or past visions due to the fatigue from dealing with the infections in Alexandria. He tries to keep himself awake to avoid these.

Carol secures their Whisperer in the prison and Gabriel, fearing that Alpha would retaliate, insists that the prisoner receive medical treatment. Lydia, from a distance, identifies him as one of Alpha's lieutenants who has been trained to avoid harsh interrogation, and instead suggests to Carol to show him the value of life within Alexandria to turn him, as it would be an idea that would spread to the other Whisperers. Carol offers the man sandwiches but he spits them back at her. Carol and Daryl revert to a more harsh interrogation, but Carol pauses after hearing him praise Alpha for sacrificing Lydia. Carol realizes that the Whisperers, outside of Alpha, do not know about Lydia's safety, and considers using her as pawn. Meanwhile, Aaron continues to meet with Gamma at their boundary, hoping to bond with her and learning that Gamma is wary of children. Gamma returns to Alpha, telling her she failed to get Aaron to talk, and leading Alpha to hit her with a switch.

Carol goes to get Lydia to see the prisoner, but the man is found dead. Dante discovers that the medical kit being used to treat the prisoner's wounds was accidentally filled with hemlock, which Siddiq was responsible for doing. Siddiq is taken aback by this, knowing his fatigue caused it. After seeing Dante burying one of the older woman he had grown close to, Siddiq attempts to commit suicide by drowning himself, but is rescued by Rosita. She tells him not to be upset with himself and they are all here to help. As they talk, Siddiq realizes something and rushes to test the water supply, discovering it to be contaminated and the cause of the infection, which he blames himself for not seeing.

Despite Daryl's strong opposition, Carol takes Lydia to see Alpha and comes across one of Aaron and Gamma's meetings, where Gamma has taken Aaron at knifepoint to demand more intel. Carol and Lydia rush forward. Upon seeing Lydia, Gamma panics and runs away, as does Lydia. Carol and Aaron are forced to back off as walkers approach. Gamma begins to cry, realizing that everything she had done for Alpha may have been for nothing.

At Alexandria, after decontaminating the water supply, Dante tries to cheer up a depressed Siddiq that what happened wasn't his fault. Dante then makes a strange verbal tic which causes Siddiq to have another lucid dream. His experience reveals to him that Dante is a Whisperer agent who was responsible for helping Alpha sneak into the Kingdom and capture their victims to decapitate. Dante senses Siddiq has become aware of this and chokes him to death apologizing it had to end this way. 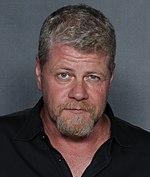 Cudlitz, who played Abraham Ford, directed his third episode for the series.

This episode marks the death of Siddiq played by Avi Nash.[1] The episode was directed by Michael Cudlitz, who portrayed Abraham Ford on the series. This is the third episode Cudlitz directed for The Walking Dead.[2]

The episode marks the death of Siddiq played by Avi Nash

"Open Your Eyes" received positive reviews, with particular praise for the twist ending and Avi Nash's performance. On Rotten Tomatoes, the episode has an approval rating of 93% with an average score of 8.09 out of 10, based on 15 reviews. The site's critical consensus reads, "'Open Your Eyes' fulfills the potential of the foundations laid earlier in this season with a surprising character death and some ingenious twists."[3]

"Open Your Eyes" received a total viewership of 3.31 million and was the highest-rated cable program of the night.[4]

Share
Retrieved from "https://en.everybodywiki.com/index.php?title=Open_Your_Eyes_(The_Walking_Dead)&oldid=1150994"
Categories:
Hidden categories:
This page was last edited on 1 December 2020, at 13:59.
Content is available under License CC BY-SA 3.0 unless otherwise noted.
This page has been accessed 703 times.
Privacy policy
About EverybodyWiki Bios & Wiki
Disclaimers