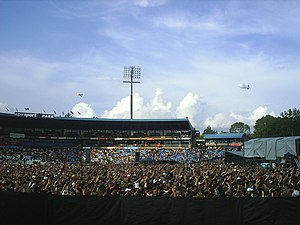 A function at SuperSport Park in 2006.

Graeme Hick, who was playing for England in the ground's inaugural Test match, became the first centurion at the ground when he scored 141. Hashim Amla has made the highest score at the ground, 208 against the West Indies. Amla and Jacques Kallis jointly holds the record for the most Test centuries scored at the ground with five each.[2]

A century was also scored in the ground's inaugural ODI, when the Indian batsman Woorkeri Raman made 114. The first ODI century at the ground by a South African was by Dave Callaghan in 1994 against New Zealand, with an unbeaten 169. Quinton de Kock holds the record for the highest ODI innings at the ground, he scored 178 against Australia in 2016. Hashim Amla has scored the most ODI centuries at the ground with five.[3]

Hashim Amla has scored record number of centuries at the venue, including 5 each in Tests and ODIs

The following table summarises the One Day International centuries scored at SuperSport Park.[3]

Retrieved from "https://en.everybodywiki.com/index.php?title=List_of_international_cricket_centuries_at_SuperSport_Park&oldid=1272098"
Categories:
Hidden categories:
This page was last edited on 22 January 2021, at 12:31.
This page has been accessed 22 times.
Content is available under License CC BY-SA 3.0 unless otherwise noted.
Privacy policy
About EverybodyWiki Bios & Wiki
Disclaimers