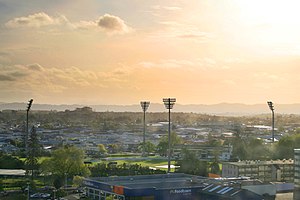 Seddon Park is a cricket ground in Hamilton, New Zealand. It has a capacity of 10,000. The ground has hosted test matches since 1991. The ground has hosted 25 test matches, 34 One Day Internationals and 9 Twenty20 Internationals till date. The first test match on the ground was played when Sri Lanka played against New Zealand in 1991. The highest test score on this ground is 226 made by England batsman Joe Root against New Zealand in 2019. Ross Taylor holds the record of most number of test centuries in Seddon Park with six, followed by Kane Williamson with four and then Andrew Jones, Asanka Gurusinha, Rahul Dravid, Mark Richardson, Daniel Vettori, Tom Latham and Mahmudullah (two each). The highest ODI score on this Seddon Park is made by Australia's Matthew Hayden against New Zealand in 2007.[1]

Number of centuries scored at this ground are 52 in test, 21 in ODI and one inT20I.

Ross Taylor has scored 6 Tests and 4 ODI centuries at the venue, most by a player

The following table summarises the One Day International centuries scored at Seddon Park.[5]

Retrieved from "https://en.everybodywiki.com/index.php?title=List_of_international_cricket_centuries_at_Seddon_Park&oldid=1271948"
Categories:
Hidden categories:
This page was last edited on 22 January 2021, at 11:43.
This page has been accessed 26 times.
Content is available under License CC BY-SA 3.0 unless otherwise noted.
Privacy policy
About EverybodyWiki Bios & Wiki
Disclaimers