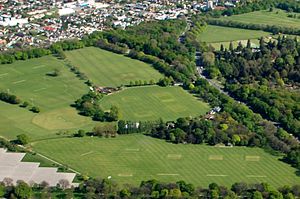 Hagley Oval is a sports ground in Christchurch, New Zealand. It has a capacity of 18,000. The ground has hosted Test cricket since its first match in 2014 when New Zealand played Sri Lanka.[1] Three Test matches have been played at the ground[2] along with nine One Day Internationals (ODIs), the first of which was in 2014 when Canada played Scotland.[3]

New Zealand batsman Brendon McCullum became the first man to score a Test century at Hagley Oval when he made 196 against Sri Lanka in inaugural match in 2014. It remains as the highest score seen at the ground. Five Test centuries have been scored at the ground, with two of them scored by McCullum.[4]

Six ODI centuries have been scored at Hagley Oval, with the first being by Scottish batsman Calum McLeod who scored 175 from 141 deliveries against Canada in 2014, which is also the highest ODI score at the venue.

The following table summarises the One Day International centuries scored at Hagley Oval.[6]