List of international cricket centuries at the M. Chinnaswamy Stadium 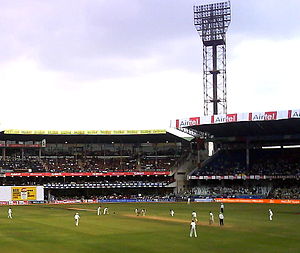 The M. Chinnaswamy Stadium during a Test match between India and Pakistan in December 2007 in which four centuries were scored.

The M. Chinnaswamy Stadium is a cricket ground in Bangalore, India. It is the home of the Karnataka State Cricket Association and is a Test, One Day International (ODI) and Twenty20 International (T20I) venue. It has a capacity of 36,000 spectators. The ground has hosted 21 Test matches, the first in 1974 when India played the West Indies. It has also staged 24 ODI matches, the first of which was in 1982 when India faced Sri Lanka. One T20I has been played at the ground between India and Pakistan in 2012. Of the 24 ODIs played at the stadium, seven have been World Cup matches, with the stadium playing host to at least one match whenever the World Cup has been played in India.

The first ODI century at the ground came in the ground's maiden ODI in 1982, with Sri Lankan batsman Roy Dias making 121 against India in a losing cause. Rohit Sharma holds the record for the highest ODI score at the ground with 209 from 158 balls which he made against Australia in 2013. The ground has also witnessed the fastest World Cup century which came off 50 balls by Ireland's Kevin O'Brien against England during the 2011 World Cup.

The following table summarises the Test centuries scored at the M. Chinnaswamy Stadium.[1]

The following table summarises the One Day International centuries scored at the M. Chinnaswamy Stadium.[2]

Retrieved from "https://en.everybodywiki.com/index.php?title=List_of_international_cricket_centuries_at_the_M._Chinnaswamy_Stadium&oldid=1271068"
Categories:
Hidden categories:
This page was last edited on 22 January 2021, at 04:22.
This page has been accessed 38 times.
Content is available under License CC BY-SA 3.0 unless otherwise noted.
Privacy policy
About EverybodyWiki Bios & Wiki
Disclaimers