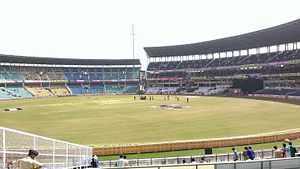 Since the VCA Stadium hosted its first Test match in 2008 and first ODI match in 2009, 9 Test and 10 ODI centuries have been scored at the ground.

The Vidarbha Cricket Association Stadium, also known as the New VCA Stadium, is a cricket ground in Nagpur, India. It is the home of the Vidarbha cricket team in the Ranji Trophy and the Central Zone cricket team in the Duleep Trophy. It is also a Test, One Day International and Twenty20 International (T20) venue. The ground was opened in 2008. It replaced the Vidarbha Cricket Association Ground as the city's primary cricket venue. The new Vidarbha Cricket Association Stadium has a capacity of 45,000 spectators.[1] It has been praised by the International Cricket Council,[2] and also by players, commentators and journalists because of its facilities.[3][4] The ground has hosted six Test matches, the first in 2008 when Australia lost to India by 172 runs.[5] It has also staged eight One Day International matches, the first of which was in 2009 when India beat Australia by 99 runs.[6] Eleven Twenty20 Internationals have been played at the ground, the first when India played Sri Lanka in 2009.[7] Of the eight One Day Internationals played at the stadium, four matches were held during the group stage of the World Cup in 2011. Of the eleven Twenty20 Internationals staged at the venue, nine matches were staged during the World Twenty20 in 2016.

The first One Day International century scored at the ground was in 2009 by the Indian Mahendra Singh Dhoni against Australia. Dhoni's 124 not out, is the third highest ODI innings at the ground. Dhoni would also score the second ODI century at the ground two months later in a match against Sri Lanka. He remains the only player to have scored more than one ODI century at the stadium. The highest ODI score is 156 by the Australian George Bailey against India in 2010. The highest ODI score by an Indian is Rohit Sharma's 125 against Australia in 2017. In total, 10 ODI centuries have been scored by nine different batsmen at the ground in 11 ODI matches.[10] No centuries have been scored in the eleven T20Is played at the venue. Sri Lanka's Kumar Sangakkara holds the record for the highest T20 International innings score at the ground, 78 against India in 2009. The highest T20I score at the ground by an Indian player is 71 by K. L. Rahul against England in 2017.[11]