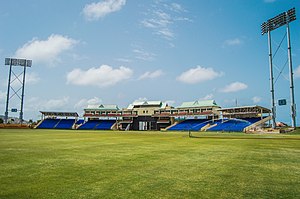 Warner Park Sporting Complex, or commonly Warner Park, is an 8,000 capacity cricket ground in Basseterre, St. Kitts, it is one of the home grounds of the West Indies cricket team. The ground hosted its first Test match in 2006 when the West Indies played India in late June. First One Day International (ODI) also played at the same tour of India in 2006. In 2009, Warner Park hosted its first Twenty20 International between West Indies and Bangladesh.[1] Since 2006 onwards, the ground has been the scene of 10 Test[2] and 10 ODI centuries.[3]

Three centuries were scored in the ground's inaugural Test match, the first was by the West Indian Daren Ganga, when he scored 135 runs in the first innings. The highest individual score at the venue is 166 scored by West Indian great Shivnarine Chanderpaul, against South Africa. A double century is not yet scored at the ground.

Ramnaresh Sarwan of West Indies became the first ODI centurion at the ground when he made unbeaten 115 against India in the inaygaral ODI match in 2006. The score of 169 which was made by the West Indian wicket-keeper Denesh Ramdin remains as the highest ODI score at the ground, which was score against Bangladesh.

The following table summarises the One Day International centuries scored at Warner Park.[3]

Retrieved from "https://en.everybodywiki.com/index.php?title=List_of_international_cricket_centuries_at_Warner_Park&oldid=1287871"
Category:
Hidden categories:
This page was last edited on 28 January 2021, at 14:31.
This page has been accessed 23 times.
Content is available under License CC BY-SA 3.0 unless otherwise noted.
Privacy policy
About EverybodyWiki Bios & Wiki
Disclaimers