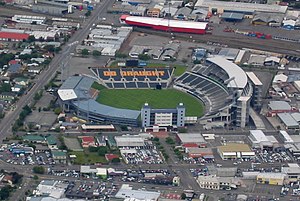 An aerial view of Lancaster Park.

The first ODI century made at the ground was in 1974 by the New Zealander Ken Wadsworth. Wadsworth made 104 from 98 deliveries against Australia. The Indian Sachin Tendulkar holds the record for the highest ODI innings at the ground. Tendulkar scored 163 not out from 133 deliveries against New Zealand in 2009. Three players have scored two ODI centuries at Lancaster Park: West Indian Gordon Greenidge, Australian Adam Gilchrist and New Zealander Stephen Fleming.[6]

Brendon McCullum is the only player to have scored a Twenty20 International century at Lancaster Park. McCullum's innings of 116 not out from 56 deliveries was made against Australia in 2010.[7]

The following table summarises the One Day International centuries scored at Lancaster Park.[6]

The following table summarises the women's Test centuries scored at the Lancaster Park.[17]